9 Sprinting Techniques To Help You Run Faster On The Pitch - 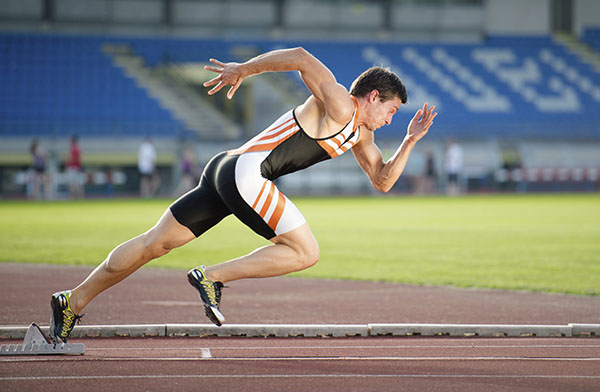 Most people often mistook resistance training for speed and explosion. The strength that you have developed in the gym room doesn’t translate immediately to power, and some lifters might not even see any improvement at all!

Your performance on the pitch is determined by your central nervous systems ability to control your execution. The idea of specificity comes into play when we’re talking about sports performance vs hypertrophy training.

A hypertrophy training session often involves pushing your muscles until near failure to stimulate maximum growth, while running at full speed requires a different kind of skillset. Proper body position, timing, and use of leverage are the 3 things that generate maximum amount of force on the field.

Nervous System Capacity
How your central nervous system fires up the muscle fibers are critical in generating explosiveness. The only way you can run faster on the field is by recruiting those motor units, so you’ll have to integrate explosive movements into your training regimen.

Now that you have learned the science behind it, let’s take a look at some of the exercises that can help increasing your speed:

a. Short Sprint Technique
Begin with longer distances (50 to 100 yards) at less than maximum capability. As your fitness level improves, gradually increase the speed until you can sprint at your maximum capability. Pay attention to how you extend your hips during the push-off phase; fully extended hips and knee drives help in acceleration during the starting phase. Vigorous arm action also contributes to faster movement.

b. Lateral Sprint Movements
This exercise is ideal for those who’re participating in field sports such as rugby and hockey. Using cones or any other similar objects as obstacles to set up a zigzag line, you’ll be running straight for 5 yards, then run towards the right or left at a 45° angle for 5 yards, and finally run at the other direction at a 45° angle.

c. Backward Sprinting
Sports such as basketball and rugby require you to sprint backward so that you can look over a player during counter attack. Practicing backward sprinting helps in developing the strength of hamstring and gluteal groups. An ideal distance to practice it is to run distances of 10 to 50 yards.

d. Downhill Sprinting
Sprint downhill or a slope that declines about 2 to 3 degrees. Beware of extremely steep hill (> 5°) because accelerating at maximum speed at such degree will greatly increase your injury risk, and you will spend most of your energy maintaining your balance rather than running.

e. Speed Parachute/Harness Sprinting
By attaching parachutes behind your back, it allows you to use the wind as resistance, thus providing more challenge to your body. Start off with 1 parachute, and gradually increase the number as your progress.

This exercise is much harder than any exercises mentioned above, so only practice it after your have run short sprints for 2 to 3 weeks. To make it even harder, run 10 to 20 yards with the chutes, and release it immediately. The sudden lack of added resistance will cause you to surge forward, and this will add even more stress to your larger fast-twitch motor units.

If you do not have access to a parachute, you can modify the exercise by attaching harness around your waist and pull a weight sled or another person as added resistance.

f. Low Hurdles
Best done if you’re currently a student or athlete who has access to a racetrack with hurdles. Make sure that the hurdle supports face your direction, otherwise it will not fall over if you accidentally hit it. Pay attention to the takeoff distance so that you can lift your leading leg forward and upward without touching the hurdle.

g. Stadium Stairs
Any stadium with staircase can be used to perform this exercise. First, find an unobstructed stairs that are sturdy enough to support your weight. Ideally, the staircase should be made of cement, and not woods.

Depending on your level of endurance, you can implement different variations of stair running, which includes two steps at a time, hopping up with single or both, or going up the stairs while jumping from side-to-side. Skiers can be benefited from stair climbing exercise that involves jumping side-to-side. Extra resistance can be added by wearing a weighted vest.

h. High-knees, Fast Arms
Simulating a sprint motion by moving your arms and knees vigorously in the same spot is excellent in developing sprint power. As such movement can put a lot of stress on your knees, it’s advisable to do this exercise on a grass field to reduce the stress on your ligaments and tendons.

i. Bounding Strides
Contrary to high knees, fast arms, this exercise requires you to attempt as few strides as possible over a longer distance. The strides should resemble bounding jumps.