How To Choose Fresh Foods For Your Diet (Part 1) - 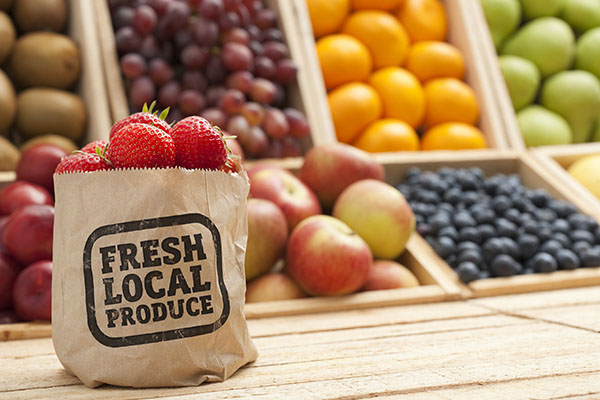 The prevalence of pesticides and toxic chemicals used on fruits and vegetables have caused all sorts of health problems. While we can’t possibly avoid them in our life, all fruits and veggies have its own telltale signs of freshness, and we can use them to pick the best fresh produce available in the market.

Apples, Oranges and Any Other Fruits
Commercial growers tend to invest heavily in chemical nitrogen fertilizer to increase the production. This chemical will harm the soil used to grow the plant, and growers have to spray a lot of pesticides just to keep the fruits healthy. Because the soil has been contaminated, chances are the fruits do not carry as much nutrient as it should be.

The soil has to be dedicated to planting one type of fruit solely. Buy directly from local farmers. Reusing soil that has been previously used to grow other plants will damage the plants, because soil that has been stirred will reduce the supply of minerals to the tree.

Asparagus
Avoid choosing stalks that are fat or twisted. It’s a vegetable that depends on the season, so enquire your local farmer if it’s imported or grown locally. Chances are those flown from overseas are not as fresh as those that are locally produced.

Do keep an eye on the cut ends to make sure they are not too woody. A good asparagus is made of spears with firm, thinnish stems and deep green/purple tips.

Bacon
Farm-raised pigs tend to be injected with chemicals. The meat is filled with nitrates and nitrites during the process of manufacturing bacon, which may cause cancer when the meat is prepared with high heat.

Some unethical butchers will also use a certain method to increase the water retention of the meat, causing the weight to increase, which allows them to sell a higher price. You can easily notice it if the bacon shrinks a lot when it’s cooked.

Best meat can be found on those who are slow-grown, rare-breed pigs that are raised outdoor.

Banana
The stems and tips should remain undamaged. As they are plucked before reaching their full maturity, make sure that you allocate ample time for it to ripen.

Don’t be afraid of some small black spots around the skin; as long as it’s just a few dots, it should be just fine. In fact, it probably taste sweeter than one with full bright yellow skin!

Beef
Grain fed beef should be avoided, as they’re often fed with grains with the purpose of rapid weight gain. This is a method commonly known as ‘finishing’.

Enquire your butcher regarding the production method; opt for traditional breed such as traditional Hereford, Welsh Black, Devon, Sussex, and Angus.

Blackberries
Go for wild berries. Those cultivated berries are often grown on inferior soil. On the other hand, wild berries will have their roots dwell deep down into the ground, absorbing all the essential nutrients.

Blueberries/Raspberries
The most common problem associated with blueberries is mould. Any damage or dampness of the packaging will result in that, and this can be noticed when you try to shake the container. If they stick together, chances are they’re not fresh.

Finish them as soon as possible, they go bad quickly.

Bread/Wheat
The flour that’s used to make the end products are often running so hot in the mill, the end product has lost all of its nutrients. Your best bet would be going for those bakery shops where they produced their own bakeries.

Broccoli
As with other veggies, it’s common to see broccoli grown using soil that are filled with chemicals. Buy organic if possible.

Cereals
To be honest with you, I wouldn’t recommend anyone to buy cereals as they’re often loaded with sugar. Manufacturers are also known for using a method called ‘extrusion’ which burns them at high temperature to give them a unique shape, but this will burn off all the vitamins in it.

A better option would be purchasing muesli made up of organic foods.

Brussels Sprouts
The tastiest Brussels sprouts are available during winter season, as they have been through a ‘cooling’ period. Any plants with yellowing or wilted leaves, soft patches or black spots may indicate that the inside is rotten. Fresh one should be available in dark green colour.

Butter
Butter that’re produced by grass fed cow tend to be of the highest quality. Margarine, on the other hand, is made using artificial oil. The higher qualities ones are far in between though.

Cabbage
The outer part of the leaves contain the most vitamins, so if you buy any cabbages that are sprayed with pesticides, you might have to strip off the first few leaves, and that means you’re actually stripping off the most useful part of a cabbage.

The cabbage should feel firm on your hand, and the outside should not look cracked like it has been thrown around like a ball.

A whole cabbage is better than those being shredded, as those who have been processed will lose their nutrients.

Carrots
Observe the top and see if they’re bright. You should never opt for wilted tops.

Cauliflower
Choose one that’s surrounded by huge leaves. They provide a layer of protection, ensuring you that the inside is being protected. Any cabbages with dark patches should be discarded.

Cod Fish
A fish that smells strong is an indication that it’s about to go bad soon. Avoid any fish that has been cut out and put on ice for too long; ask the fishmonger to cut a portion of the fish out from a whole fish right in front of your eyes.

Dandelion Leaves
Those that grow up beside the main road tend to be covered with chemicals coming out from vehicles. The good thing is that there are plenty of them grown in the wild, and it’s available all year round.

Eggs
Chickens that have free access to huge plain of uncontaminated pasture lay the freshest eggs. Sadly to say, most chickens are fed with grains ever since they were born. Go for Omega 3 eggs to be safe.

Herring
As with other fishes, it’s best to purchase fish once they have been captured from the sea. They might have been polluted by oils leaked from boats, so do check with your local authority and keep updated with the latest news to make sure there’s no leakage happening when the fish is captured.

Kale or Any Dark Leafy Vegetables
It’s full of vitamins and minerals, so it’s best bought from local farmers who used dark soil to grow it. Enquire it prior to your purchase.

That’s all for now! Stay tuned for part 2 as we explore more food choices in our upcoming article.