Why Women Will Not Bulk Up from Lifting Weights - 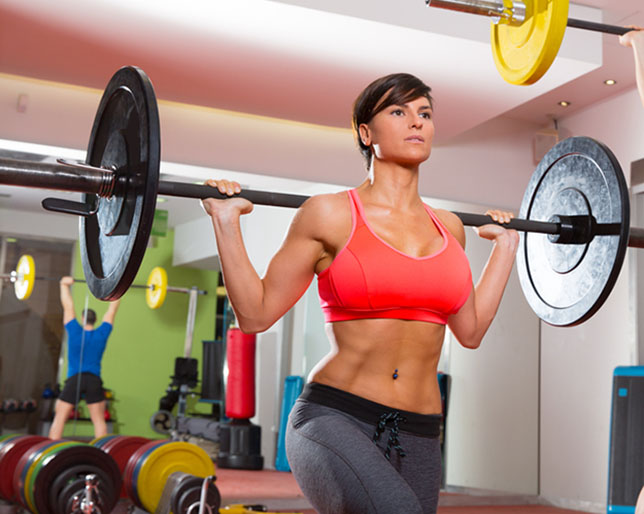 One of the biggest mistakes a woman can ever make in her life is to avoid lifting weights. Perhaps the No. 1 reason that a woman won’t lift weights is because she believes this will bulk her up.

Of the women who do use weights, a significant percentage use only light weights, because—again—they’re convinced that anything that feels heavy will give them an unfeminine or over-muscled body. The real antithesis of femininity is the hulking body of woman who is obese.

Here are just some amazing benefits of working out with weights:

This is the result of a collapsed vertebral column. The bones in the vertebral column, over time, become porous and weak, and lose their ability to support the body. The body collapses on itself over time. Intense strength training prevents this.

What about the women who are bulked up from weight lifting?

Do you swim? If so, aren’t you afraid of bulking up? After all, Olympic female swimmers are often thick and have huge shoulders and broad backs. Though this conclusive stretch is silly, this is the precise kind of thinking that many women have when it comes to working out with weights.

They see a woman in a bodybuilding magazine with substantial muscular development, then draw the conclusion that if they, too, start workout out with dumbbells and barbells, they’ll end up with the same kind of body! This is no more likely to happen than is acquiring overly-broad shoulders and a big back from swimming laps in your gym’s pool.

So what makes competitive female bodybuilders so muscled up? First of all, realize that to prepare for competition, a bodybuilder diets very strictly in the weeks preceding the event, to get their body fat percentage as low as possible.

A strikingly low body fat level will reveal every muscular detail, creating the illusion that the athlete is more muscular than she actually is.

After the competitive season is over, she will resume a higher caloric intake which will raise her body fat level. The nooks and crannies of her musculature will get filled in with fat, reducing the appearance of muscularity.

A competitive female bodybuilder can drop her body fat level down to as low as 7-8 percent—something that she cannot maintain; it’s only for competition. There is virtually nothing between her skin and muscle, so you see every fine detail, every striation of her muscles, plus the veins; she is “ripped.” This is not how she looks all year long!

Secondly, these athletes train 2-3 hours a day, 5-6 days a week. Third, their goal is to get as big as possible. This influences the training protocol. Next, they eat large quantities of protein and complex carbohydrates. Many eat up to 150 grams of protein every day.

What about non-competitive women who think they’re too muscular to lift weights?
What’s really going on is that these women are imagining this. How can the typical woman put on muscle so easily, when so many men—who have 10 times as much naturally occurring testosterone—can’t gain much muscle despite spending a lot of time lifting weights?

The typical scenario is a woman who’s convinced she has too much natural muscle. Her mind is already primed for being hyper-alert when it comes to developing muscle. So when she starts strength training, she may start seeing what she expects to see, when in actuality, she’s more shapelier and firmer and has even lost some body fat.

Sooner or later every personal trainer gets a female client who says something like, “I can’t do much weight lifting because I bulk up so easily. My legs already have too much muscle.”

The personal trainer then takes a body fat reading of the client, and it’s well over 25 percent, sometimes over 30 percent, putting her in the overweight range. The trainer can tell if the girth in the client’s thigh is fat vs. muscle.

Whereas the client thinks there’s too much muscle in her thighs, the trainer clearly sees, upon taking a skin fold with a caliper tool, that there is too much fat. Especially in a young woman, this fat can masquerade as muscle to the untrained eye because it doesn’t jiggle or appear fluffy.

The skin is youthfully supple, and beneath the thick layer of fat the muscle is toned from perhaps regular aerobics sessions or athletic involvement. The fat is solidly packed in there, and all of these variables create the illusion of too much muscle.

Furthermore, a woman may appear thick all over due to, quite simply, excess body fat all over. She mistakes the body fat for muscle, especially if she’s athletic.

There’s a psychological component at play, too; most women would rather believe they have surplus muscle than surplus fat. The issue is that of too much fat between the muscle and skin, rather than too much muscle beneath the fat and skin.

What happens when a woman strength trains intensely?
A woman’s muscles will grow in density and become more compact as she gets stronger, resulting in a shapelier, harder or more toned body. Cellulite will disappear, along with excess body fat.

Imagine stuffing tissue paper into a paper cup. You keep cramming it in there, increasing the mass and density of the paper, without enlarging the cup. This is kind of what happens when the typical woman lifts weights for the goals of fat burning, fitness and health. She becomes tighter and denser, but not bulkier or bigger.

A woman can get quite strong without having the big muscles to show for it. In order to get burly looking muscles, a woman has to acquire a significant amount of strength, since strength correlates with muscle size. Many women are afraid to take up bench pressing (a big fat burner), fearing it will bulk them up, even though they can barely bench a 45 pound Olympic bar.

Even a lot of men who bench press are not big, despite pressing 185 pounds. A woman has to realize that her workout of 100-pound bench presses (which is a lot for a woman) is not sufficient to force her muscles to get big.

Muscles won’t get big unless they have to. Strength = size. You can’t bulk up unless you’ve achieved a lifting range of extraordinarily heavy weight.

If a woman begins training with weights and uses a 50 pound barbell for bench pressing, deadlifts and free squats, she’ll need to triple this load for all three exercises before she even begins to see what appears to be muscle-building changes.

Overcoming the fear of bulking up is easy with these steps.

Change the terminology. Muscle is known as lean mass. Terminology has a very powerful effect on people. The popularity of weight workouts among women exploded in the 1980s after someone coined the term “weight training.” The term weight training then got picked up by women’s magazines.

Suddenly, women began hitting the gym to hit the weights, to weight train, not to weight lift. The terms strength training and body sculpting soon followed, having more feminine appeal. Notice that men rarely say “weight training” when speaking of their own weight lifting workouts.

Look at women over age 60 who have never strength trained. Do you really want to look like that one day? Most women over 60 are obese or quite hefty. Not only that, but they have piles of cellulite, upper arms that flap with every stride and rolls in their stomachs.

At the other extreme are the “little old ladies” with their hump backs, alarmingly short torsos and brittle bones. The skin on their arms is shriveled like leather in the sun because there’s very little lean mass for the skin to contour around. Same for their legs.

Is this what you want to look like? Imagine what women—who do serious strength training, who even appear a bit too “muscular” for your tastes—will look like when they’re 70. It shouldn’t even be remotely conceivable that they’ll resemble the typical 70-year-old.

Evaluate your current body. Are you unhappy with it? If you’re overweight, would you rather stay that way or slash body fat with strength training? Ask yourself if you’d rather be obese, or lean and buff with shapely, firm muscle?

If you’re not overweight, then ask yourself how badly you want to 1) Prevent osteoporosis and height shrinkage down the road, 2) Slash heart disease and cancer risk, the top two killers of American women, and 3) Be able to eat more of your favorite foods without gaining weight.

Remind yourself that adding lean mass is not an overnight event. This takes time. Ask any very muscled man and he’ll tell you it took a long time. You will not awaken one day suddenly with huge muscles.

As your physique transforms from a strength training program, you’ll see the results. If you decide, “Hey, my shoulders are getting a bit too muscular,” then all you need to do is adjust your program to prevent further development. You control your body’s development.

Ask anyone who’s ever had to lay off the weights due to injury just how quickly it took for their muscles to shrink. When your body reaches the development that you like, then you can enter into a maintenance program rather than stay on a progressive path.

Remind yourself that many of today’s female celebrities lift weights—the very stars whose bodies are envied by millions of women. Which celebrity bodies do you think look fabulous? Chances are very high that they lift weights, especially if they still have a great figure despite being over 40.

In life, there are two choices: bulk up with fat, or lean out with muscle. Muscle, by definition, is lean. Any “bulk” that the typical woman has is excess fat, and the best way to strip this off is by working out with resistance: dumbbells, barbells, kettlebells, machines and bodyweight.